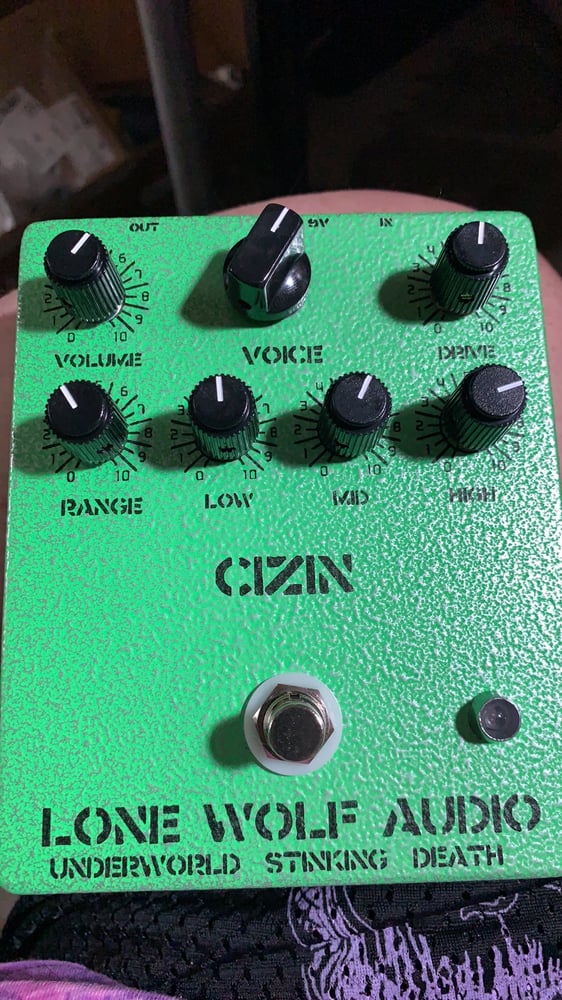 Cizin, also spelled Kisin, (Mayan: “Stinking One”), "
Mayan earthquake god and god of death, ruler of the subterranean land of the dead. He may possibly have been one aspect of a malevolent underworld deity who manifested himself under several names and guises (e.g., Ah Puch, Xibalba, and Yum Cimil). In pre-Conquest codices, or manuscripts, the god of death is frequently depicted with the god of war in scenes of human sacrifice. One aspect of the dualistic nature of the Mayan religion is symbolically portrayed in the existing codices, which show Cizin uprooting or destroying trees planted by Chac, the rain god. Cizin is often depicted on pottery and illustrated in the codices in the form of a dancing skeleton, holding a smoking cigarette. He is also known by his death collar, the most prominent feature of which consists of disembodied eyes dangling by their nerve cords."

The Cizin is rooted in the SUNN Beta Lead/Bass, but given a bit of a full overhaul to make it less for stoner rock/doom, and more for what I care about.

The EQ is voiced for an emphasis on power, and thick riffs minus the doom scenes love of a lack of clarity, basically, Less mud, more presence.

It has a 6 way mid voice control, and a range knob that lets you dial the mid response peak.

It has an internal voltage upconverter to run at 18v off a 9v in, (DO NOT PUT MORE THAN 9V IN) to allow for bassists to get the headroom they want, and guitar players to drive their big amps the way they need to.

As this product is made 1 a time, by hand, i do not offer refunds or order cancellations. I dont care about your impatience issues, so if you have an issue with this, dont order.

Also, as this product is not made to work with a budget brand power supply, so a one spot or other daisy chain type low end junk will void your warranty.
It needs an isolated and regulated high end power supply.

All sales are final.